The homeless activists of The City is for All and their allies were holding hands, telling poems and singing around the chairs of the Budapest City Council members in the council’s assembly room at 8.15am on Thursday, November 14th. The group’s aim was to prevent the assembly from passing an ordinance, which extends the criminalization of homeless people to a major large part of the city. With this demonstration, we have made it clear that homelessness is an inacceptable condition, which should be eliminated through social policy and not punitive measures.

Last year the Constitutional Court struck down a national law that criminalized homelessness on the grounds that it violated the right to human dignity. In order to be able to criminalize homelessness, the governing majority voted for a modification of the Fundamental Law, which now includes the state’s right to criminalize street homelessness. In September, the governing majority voted for a national law that makes street homelessness a petty offence on UNESCO world heritage sites (which is practically the entire downtown of Budapest) and enables local governments to designate further “homeless-free” zones. 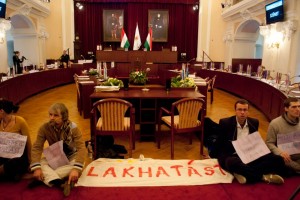 After the activists formed a living chain around the chairs of municipal representatives, István Tarlós, the mayor of Budapest first suspended for a couple of hours, and then ordered a closed meeting. Shortly afterwards, the nonviolent protestors were forcibly removed from the building by the police. The majority of the council later voted for a modified version of the local ordinance about the penalization of homelessness.

During the sit-in, the protestors chanted poems, read the European Social Charter and the Universal Declaration of Human Rights out loud along with the following text:

We came here today, because in October the government modified the Petty Offences Act, which made homelessness a petty offence in the whole inner city of Budapest punishable with public work, fees and incarceration.

We came here today, because today the Budapest City Council will vote on a new local ordinance, which would largely expand the areas in Budapest where homelessness is punishable.

We came here today, because the local governments in Budapest are assigning more and more ‟homeless-free” zones where homeless people are not allowed to stay.

We agree with the Constitutional Court that removing homeless people from public spaces is not a legitimate reason for the criminalization of homelessness.

It is unconstitutional for the state to use punitive measures to force homeless people to use the social services.

The exclusion, the discrimination and removal of homeless people from public spaces do not solve the situation of roofless people, but make it even more difficult.

We came here today, because we believe that all human beings are created equal; we believe that we owe responsibility to each other, and we believe that homelessness is not the crime of homeless people, but the consequence of an unjust social order.

We want to live in a country, in a city where fairness, justice, and freedom are not just words, but the principles of public policy.

We came here today to demand that István Tarlós, the mayor of Budapest withdraw the proposal which would enable the harassment of homeless people by the authorities and that he create a housing strategy, which provides homeless people with access to affordable housing and which prevents indebted families from becoming homeless. For this, the amount of housing assistance should be raised, an extensive network of social rental housing should be developed and fair wages and fair pensions have to be guaranteed.

All human beings are created equal!

Further information about the criminalization of homelessness in Hungary

🔥💪 For the first time, a spanish judge has condemned the inclusion of abusive clauses in #Azora rental contracts, admitting they are the base of unbalance between landlords and #tenants in renting contracts #HousingJustice #Spain #Housing ➡️ housingnotprofit.org/spain-legal-vi… Retweeted by reclaiming_spaces 4 days ago

If Scotland can do it so can we: #RentFreezeNow Rent Freeze Day of Action - organise locally or join us Sat 11 Feb, 12pm Dept Levelling Up SW1P 4DF #ServiceChargeFreeze tinyurl.com/RentFreezeActi… @pplsassembly @PricedOutUk @crosstowns Retweeted by reclaiming_spaces 5 days ago

*español abajo* What do we want? RENT CONTROL! When do we want it? NOW! Join CLVU for a #RentControlMA rally in front of the State House at 11am. We will continue to fight for a rent control policy that protects tenants from extreme rent increases and no-fault evictions🏡. Retweeted by reclaiming_spaces 1 week ago

💥Call to #action! From the 25th of March until the 2nd of April 2023, we will take the streets all over Europe for the right to housing, the right to the city. 🔊Become a part of it: organise, mobilise and join the #HAD2023 in your city!🔥 Info: housingnotprofit.org/housing-action… Retweeted by reclaiming_spaces 3 weeks ago

#ForcedEviction Alert, Delhi: On 26 Dec 2022, officials from @MCD_Delhi & @DelhiPolice demolished 9 houses in Paharganj w/o due process. Families belonging to the marginalized #GadiaLohar community including infants, children, & women rendered homeless amidst the severe #ColdWave Retweeted by reclaiming_spaces 3 weeks ago

🚨 New Census 2021 data on housing Manchester has the highest level of private rented housing outside of London This is esp. concentrated in the centre where the rise of corporate landlords through the Build to Rent sector has been supported by Council planning policies Retweeted by reclaiming_spaces 3 weeks ago

Kurds in Germany look at this photo of German interior minister “strengthening bonds” with Turkish interior minister while Kurdish towns are bombed by Turkish war planes and Kurdish politicians populate Turkish prisons, and right there the international becomes very personal. Retweeted by reclaiming_spaces 2 months ago

Today is #worldchildrensday2022 Milan launches Open Plazas for every School: a call for projects to codesign and reclaim public spaces around schools with communities, through tactical urbanism, for the rights of future generations Every city should do the same! #PiazzeAperte Retweeted by reclaiming_spaces 2 months ago

At our meeting today we discussed Awaab Ishak, an innocent child, the latest victim of substandard housing. Millions of us face damp and mould. We stand in solidarity with campaigners in Rochdale & @gmtenantsunion We will end the preventable suffering of so many in poor housing! Retweeted by reclaiming_spaces 2 months ago

Tonight the fascist Turkish state bombed Kobane, the city of resistance and humanity. The city almost looks like when ISIS attacked it in 2014. Anyway the aim is the same. Genocide against the Kurds and the fear of the women's revolution. Don't stay silent. #TurkeyAttacksRojava Retweeted by reclaiming_spaces 2 months ago

Join the protest today in #Dublin! twitter.com/AllPeopleAllNa… Retweeted by reclaiming_spaces 3 months ago

It's official. Berlin police announced that more than 100,000 people participated in the rally today. Biggest ever gatherings of Iranians abroad ... #MahsaAmini #مهسا_امینی #IranProtests Retweeted by reclaiming_spaces 3 months ago

The brutal death of 22-year-old #MahsaAmini sparked nationwide anti-opression protests in Iran. In the past three weeks, 154 people have been killed and over a thousand detained. Retweeted by reclaiming_spaces 4 months ago

IT’S HERE, AT LAST!! Beautiful and smooth in hand, but let’s not fetishize the object. As I look at my copies, I revive all the collective work, support, care, love, and indeed commons that made this possible. Comrades & friends, this is our joint accomplishment - thank you ALL! Retweeted by reclaiming_spaces 4 months ago

Eviction blockade in #Budapest now! A 67 year old woman is supposed to be evicted from a municipal apartment. The local mayor (Fidesz) voted for an eviction moratorium just a week ago. #StopEvictions #AVarosMindenkie #LakhatástNeZaklatást twitter.com/kettosmerce/st… Retweeted by reclaiming_spaces 4 months ago