In Germany rental housing is more important than in most other  countries, especially in the cities. In the Ruhr metropolitan area nearly 68 % of all housing units are rented. Most of the buildings in this region were constructed during the decades of industrial growth, by coal and steel companies, trade unions and municipalities as part of the non-profit-housing-sector.  When the national government in 1989 abolished a law which protected non-profit-housing from being sold out, it opened the way for a deep  process of commodification and privatization of the existing housing stock. At the same time German governments alongside with the EU also liberalized financial markets. 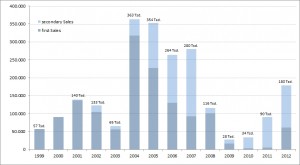 When the global housing bubble started after 2000 transnational  financial investors soon became attracted by principal offer the huge stocks of mass housing. To them  the high portion of rental housing looked like a huge potential for privatization, comparably low rents gave reason to expect high rent increases and high vacancy rates looked like an easy way to improve the performance. Many public institutions, municipalities and industrial companies in Germany sold their rental housing stocks to those transnational financial investors.  Approximately 900.000 housing units today are under direct control of financial investors, many of them have been traded more than one time. The quantitative effects concentrate on particular cities and regions in Germany, especially cities in the Rhine-Ruhr area..  In Dortmund every 5th rental flat is under control of the financial markets, in other towns it is 10 %.

The new “investors” financed their buy outs with little equity and huge loans which were placed on the (often repaid) properties as mortgages and then refinanced by complex and very big (partly over 6 billion) securitizations. These securitizations very much influenced the business models. The new landlords had to follow the limits set by the loan conditions. The whole housing   business, any aspect, became a function of finance.

The consequences for the tenants and the housing stocks were and are disastrous: Forced to extract high returns and interests the landlords heavily reduced the maintenance of the aged housing stocks and the work force in their management. Tenants are suffering from defects in heating, from humidity, not working escalators or not available garbage services. The obligatory annual balances for service fees are often wrong or the landlord does not present them at all. In a raising number of cases water and energy supply was questioned because the landlord did not pay. Service providers often are change, sometime the tenants do not know who is responsible at all. A part of the companies “defaulted”.  Some housing “portfolios” with important housing schemes in disfavored satellite towns today seem captured within an endless loop of asset-stripping.

To these and other problems with the consequences of the financial business-models organized tenants reacted with protest. Media covered their daily stories. Soon broad criticism from various sectors of society, especially in the Land NRW, mad it a political issue. Tenant associations organized advocacy and public pressure, which during the NRW elections 2010 led to promises by the Greens and the SPD. The main reaction was a parliamentarian commission which for the first time intensively studied the business models of the new investors and its consequences.

After more than 2 years of work the commission presented a voluminous report with studies and a list of political proposals. Meanwhile one of the proposals – a stricter law on municipal control of badly maintained housing – is passing the parliamentarian process.  But many municipalities are deep in debt. They hardly will implement the new instruments.  And the same time public banks and governments in other Länder have continued to sell housing companies to private business with relation to financial investors.

For some years it seemed that a couple of large securitizations for mass housing debt, which were created between 2005 and 2007 would fail to fulfill repay-obligations in 2013. But then the crisis of sovereign debt in southern Europe led to an escape of international capital to more “secure” investment opportunities, which some of them are finding in German real estate. This demand for investment assets at low interest rates made it possible that nearly all large securitizations which ended in 2013 could be repaid and refinanced by new loans. And at the same time these new conditions at international capital market allowed the exit of the invested funds.

Three huge investment platforms started their IPO during the last 18 months and are now publicly traded housing companies. The new shareholder structures meet a rapidly changing market. Accessible housing had become rare in prospering cities and rents are rocketing. The new financial situation as well as the housing market environment now leads to shifts in the strategies of the investors. Rent increases and expensive modernization are becoming another thread for the tenants.

It is typical that nearly all of the financial “investors” which have been active in this business as well as the municipal agencies of those cities who have been heavily affected by the business   – Dortmund, Bochum, Düsseldorf, Cologne – visit the MIPIM 2014. They hardly will negotiate a return to non-profit housing. The financial investors are mainly looking for new shareholders and other exit options. The municipalities who are under pressure by high deficits continue to sell our land and infrastructure.  We, the inhabitants, have to pay the prize. For ever?

Antimilitarism is for everyone 💛💜💙 Across the world, movements are taking action against an expanse of different crises and challenges: economic inequality, war, climate change, authoritarianism, extractivism, gender liberation, free movement... the list goes on and on. Retweeted by reclaiming_spaces 9 hours ago

"the Sami, will be forced, by a company owned by the Swedish state, to give up land, culture, Sami place names, traditions and future in the area where our ancestors have lived since ancient times...to carry the burden of the demand for ”green minerals”" minoddagiron.se/press-informat… Retweeted by reclaiming_spaces 13 hours ago

The printed version of our article is now out: The outcomes of residential squatting activism in the context of municipalism and capitalism in Madrid and Barcelona (2015–2019). Journal of Urban Affairs 45(1): 65-83. 🧵 tandfonline.com/doi/full/10.10… Retweeted by reclaiming_spaces 8 hours ago

🔥💪 For the first time, a spanish judge has condemned the inclusion of abusive clauses in #Azora rental contracts, admitting they are the base of unbalance between landlords and #tenants in renting contracts #HousingJustice #Spain #Housing ➡️ housingnotprofit.org/spain-legal-vi… Retweeted by reclaiming_spaces 2 weeks ago

If Scotland can do it so can we: #RentFreezeNow Rent Freeze Day of Action - organise locally or join us Sat 11 Feb, 12pm Dept Levelling Up SW1P 4DF #ServiceChargeFreeze tinyurl.com/RentFreezeActi… @pplsassembly @PricedOutUk @crosstowns Retweeted by reclaiming_spaces 2 weeks ago

*español abajo* What do we want? RENT CONTROL! When do we want it? NOW! Join CLVU for a #RentControlMA rally in front of the State House at 11am. We will continue to fight for a rent control policy that protects tenants from extreme rent increases and no-fault evictions🏡. Retweeted by reclaiming_spaces 2 weeks ago

💥Call to #action! From the 25th of March until the 2nd of April 2023, we will take the streets all over Europe for the right to housing, the right to the city. 🔊Become a part of it: organise, mobilise and join the #HAD2023 in your city!🔥 Info: housingnotprofit.org/housing-action… Retweeted by reclaiming_spaces 4 weeks ago

#ForcedEviction Alert, Delhi: On 26 Dec 2022, officials from @MCD_Delhi & @DelhiPolice demolished 9 houses in Paharganj w/o due process. Families belonging to the marginalized #GadiaLohar community including infants, children, & women rendered homeless amidst the severe #ColdWave Retweeted by reclaiming_spaces 1 month ago

🚨 New Census 2021 data on housing Manchester has the highest level of private rented housing outside of London This is esp. concentrated in the centre where the rise of corporate landlords through the Build to Rent sector has been supported by Council planning policies Retweeted by reclaiming_spaces 1 month ago

Kurds in Germany look at this photo of German interior minister “strengthening bonds” with Turkish interior minister while Kurdish towns are bombed by Turkish war planes and Kurdish politicians populate Turkish prisons, and right there the international becomes very personal. Retweeted by reclaiming_spaces 3 months ago

Today is #worldchildrensday2022 Milan launches Open Plazas for every School: a call for projects to codesign and reclaim public spaces around schools with communities, through tactical urbanism, for the rights of future generations Every city should do the same! #PiazzeAperte Retweeted by reclaiming_spaces 3 months ago

At our meeting today we discussed Awaab Ishak, an innocent child, the latest victim of substandard housing. Millions of us face damp and mould. We stand in solidarity with campaigners in Rochdale & @gmtenantsunion We will end the preventable suffering of so many in poor housing! Retweeted by reclaiming_spaces 3 months ago

Tonight the fascist Turkish state bombed Kobane, the city of resistance and humanity. The city almost looks like when ISIS attacked it in 2014. Anyway the aim is the same. Genocide against the Kurds and the fear of the women's revolution. Don't stay silent. #TurkeyAttacksRojava Retweeted by reclaiming_spaces 3 months ago